HISTORY ON THE HUDSON

The snow obscured the road north, slowing the vehicles carrying the UPENN women's hockey team, setting feet taping.  "We were worried the game would get cancelled," recalls Jennifer Kang.

Normally weather isn't an issue for DVCHC games, but this was different.  This one was outdoors.

Hosted by Columbia University and dubbed the Ivy League Winter Classic, the match-up of Philly vs New York, UPENN vs Columbia, was held the Saturday before Thanksgiving.

Jutting out into the Hudson, steps from the northern stretch of Broadway, the Riverside Bank Park played host to the league's 1st outdoor event.

Columbia's Allyson Gronwitz had been advertising her team's "one true home game" for weeks.  With the snow stopping, only one obstacle remained for fans.

"It was the coldest night of the winter," she said.  "Mid-20's for sure, but our amazing fans showed up anyway.  What troopers!"

Columbia's Kofi Opoku was one of the many filing into the rink. "It was very cold! Just my two cents."

UPENN fans joined too, bundling up on the bleachers, even on the bench.  Coach Brett Kauffman, a spectator of sorts, took to twitter: "Ivy League Winter Classic Upenn v Columbia Outdoor Game....it's cold out."

And with that, the teams squared off, the crowd let out a cheer that held as a vapor in the crisp air, and the classic was underway.

Columbia's Samantha Weinberg scored her first 2 goals of the season and gave the home team a lead through most of the 1st period.  Kathryn Zehr added a 3rd CU goal and  Sarah Stern stopped 34 shots but it wouldn't be enough.

UPENN newcomer Elizabeth Hitti tallied a game winning hat-trick in her 1st DVCHC game.  (She'd do the same the next day against North Jersey).  Five teammates added tallies, including Stephanie Petrella's 1st college goal & Meredith Dominguez's 1st of the year.  Goalie Kimberly Feeney picked up a 5th straight victory and the game finished as an 8-3 win for the visitors, moving UPENN to 6-0 and Columbia to the opposite, 0-6.

Though it was a great game, the scoreboard was not the highlight. The gently falling snow, the cheering crowd, the flash of skates, was.

Columbia University and the University of Pennsylvania hosted the league's 1st outdoor classic on November 23, 2013.


This video, profiling the Columbia team practicing
at Riverside, was featured in the Columbia Spectator,
days before the 'Ivy League Winter Classic.' 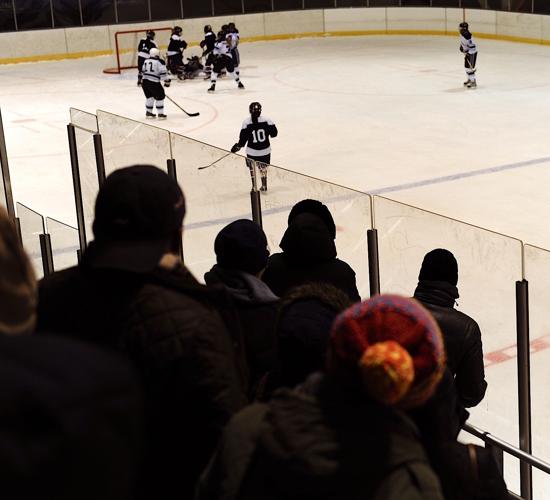 "The girls really enjoyed it," said Columbia coach Wei Leong. "This was definitely the best game of the season so far."

That season, featured in a fantastic article in the Columbia Spectator days before the game, has been one devoted to teaching the sport, having fun and experiencing the thrills of hockey.

Senior Allyson Gronowitz found nothing more thrilling than the vibe at Riverside:

"I was not only able to picture myself as a professional hockey player, but as one playing in the outdoor Winter Classic. Literally living the dream. It was one of the highlights, if not THE highlight of my college career."