In February, three remarkable wins earned the team at Slippery Rock their first DVCHC DII Championship.  Now the girls in green are back, kicking off their title defense with 3 new wins.  Big ones.

In 153 minutes of hockey the champs have recorded 2 shutouts, scored 30 goals and allowed their opponents only 3 shots a period.

"We have a lot of talent and really work well together," says junior Meredith Gruseck.  "It is a great preview of how the season is going to go."

At this pace, she might not be wrong.  While it's true her team has only faced a short-benched beginner in Columbia and last season's last place, IUP, the Pride also defeated two D1 teams in September to claim the MAHA Crab Pot trophy.

The secret to their slippery success?  "A team has to be a family," says forward Amanda Althouse who is averaging 2.7 points a game .  "I think that is why we play so well together."

Columbia University takes their first steps in the DVCHC while team Slippery Rock continues its early dominance (...and snaps a few photos in NYC).

This weekend's SRU vs Columbia series was both a proving ground for the Rock's talent and a chance to strengthen that family feel.

"It is nice to have road trips because they bring us closer together and give us a chance to bond and experience new things," said SRU's Madeline Whitney.  "A lot of the girls had never been to New York City."

FIRST TIME IN THE LION'S DEN

For Columbia University, this weekend marked a historic first step into the DVCHC.  It was also a chance for the New Yorkers to play host to their first division guest.  The experience was one both squads would enjoy. 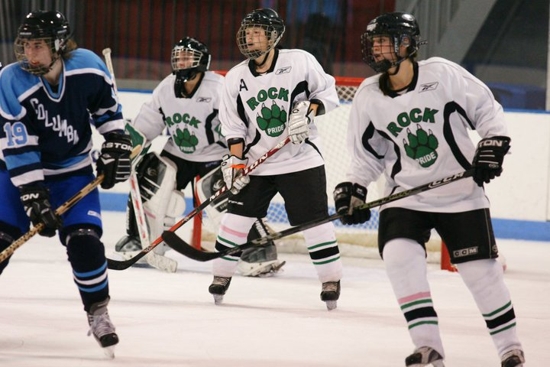 "The Slippery Rock girls were good sports on and off the ice and we appreciate them taking the time to drive to the city to play us," says team president Wei Leong.  "The one thing we all agree on... the games were very fun, but undoubtedly exhausting."

Exhausting for sure.  The Lions rostered 7 skaters to face the speedy champs, who in turn only showed up with 9.

"They were tough," Leong admitted.  "While Slippery Rock only had nine, their defense was very strong and they held off the majority of our offensive attempts."

The first game wouldn't be close on the scoreboard, however it showed very encouraging signs of life for young Columbia;  Wei Leong and Allyson Gronowitz scored the first CU goals in DVCHC history, the team succeeded on 2 of their 9 attempts and 4 of 7 blue-clad skaters tallied a point.

Unfortunately for the Lions, the Rock's offense this weekend was 10 times as productive.  Literally.  After the 11-2 win on Saturday, senior goaltender Emily Greer closed the door on Sunday's contest, allowing her team to overpower the Lions 10-0.

All nine SRU skaters tallied points in the series with Amy Bauman leading the way; The current DII leader notched a staggering 14 points and was +15 this weekend.  A young forward from Redding, PA, Bauman is averaging a devastating 6 points per game.

Defensemen Allie Zube had 3 goals and a +17 rating, brining her league leading total to +23.

All of that offense was brought to bear on NY's netminder, senior Allison Levin who stopped 68 shots to keep her Lions breathing.  SRU coach Joe Carothers asked that she be awarded the weekend's second star for her unyielding effort. 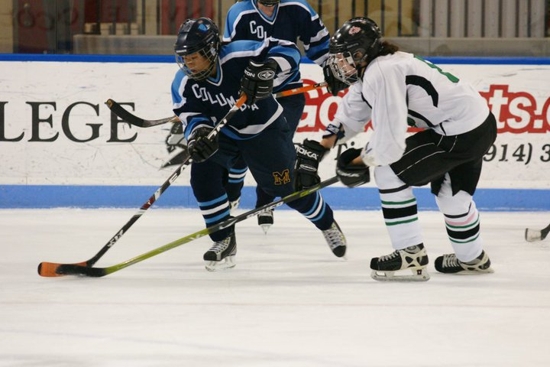 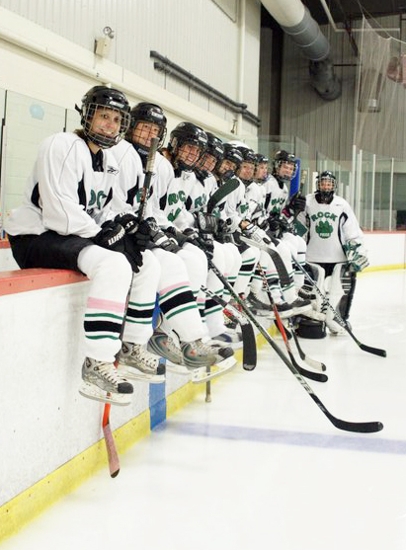 All aboard! Slippery Rock earned a few smiles in NYC.

When the dust settled, Slippery Rock had handed their hosts a rather harsh welcome:  21-2 in two games.  In spite of this lopsided outcome, both teams were clear about one thing: there are a lot of games left until February.

"It's always great to start the season off with a couple wins but there is always room to improve," said SRU defensemen Kira Isenberg.  "We have to keep working hard."

Columbia's Leong agrees.  "We know what we need to focus more on now and we are looking forward to our next DVCHC match."