To Hoist A Symbol Hue

With 16 seconds left to play in a championship tied 2-2, the Hagerstown ice rink began prepping for overtime.

Box staff pulled out rules governing the extra frame.  Coaches imagined what they'd say during the break.  Fans and even the officials mouthed the letters "O.T." to one another.

One more faceoff between the US Naval Academy and Slippery Rock, then the DVCHC Women's DII Championship would go to a sudden death format for the second year in a row.

Then the moment no one had planned for:

Ziek backhands the puck to the high slot, looking for Christine Tyndall, who's gone to the net.  ...twelve seconds...

SRU's Amanda Althouse stops the attack by pivoting around the loose puck and fires it to teammate Dana Bowersox, on her way out of the zone ...ten seconds...

The pass never gets there.  Navy captain Ella Starr picks it off near the blue line, sets the puck on her stick and fires ...eight seconds...

The shot streaks across the entire zone, through feet, alongside sticks, then past goalie Emily Greer.  Goal!

The buzzer sounds and the stands let loose: uncontrolled screams from Navy fans, gasps and a loud "Ohhhhhh my God" from the Slippery Rock faithful.  Starr spins, slams her stick to the ice and leaps into the arms of Jacquelyn Drew while their teammates race, screaming after them.  ...six seconds, now paused...

Later, rink workers would swear it was the loudest they'd ever heard the building get.

Photos by Duane Isenberg. THANKS! 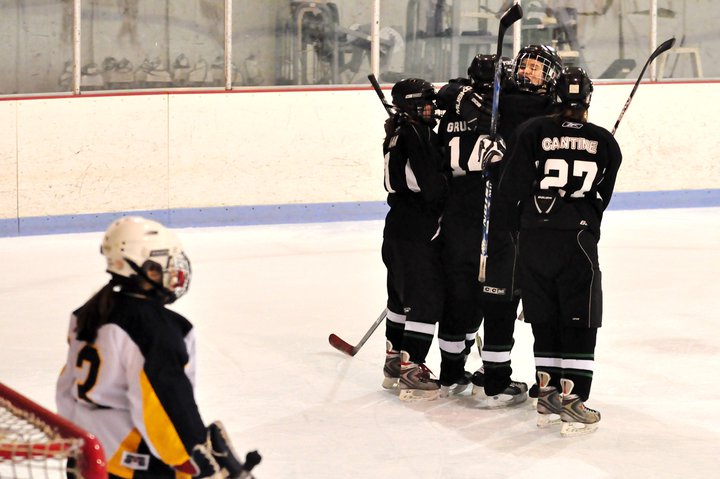 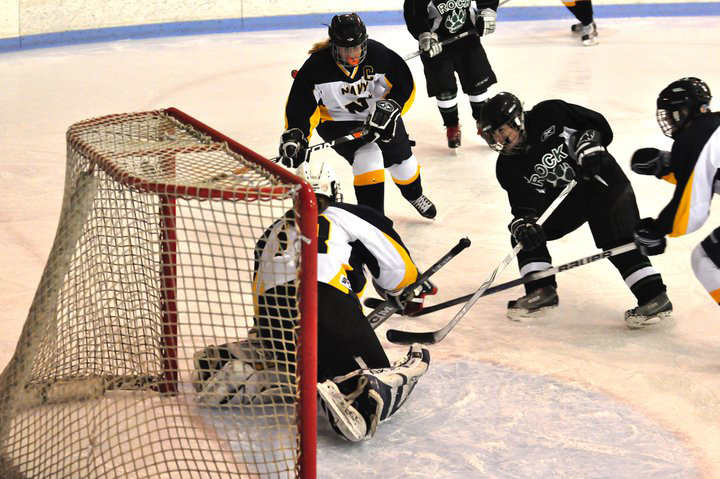 The Slippery Rock players skating back to the bench, hadn't been in this position all season.

From their impressive win at Maryland's Crab Pot Tournament, to their undefeated 10-0-0 season, the Rock had been rolling since their DII Championship a year ago.  If any team had the tenacity to repeat, it was them.

Talented and speedy, the Pride finished the season ranked 5th in the ACHA East (their best showing ever) and was a near miss for the ACHA National Championship.  The team's blinding offense notched 66 goals while solid defense and netminding only allowed 7 goals against, the whole DVCHC season.

Star forward Amy Bauman led the entire division with 30 points (3 points a game) and every one of her teammates who had played more than one game, had points.

As the tournament's first seed, the girls in black marked their return to playoffs with a 8-2 pounding of IUP.  While the Crimson Hawks put up an amazing fight, the squad was ultimately drowned beneath a sea of 47 shots.  Next would be Navy, a team the SRU girls had taken down 7-2 and 5-1.

The Naval Academy, in their second year as a team, recorded their most impressive season, too: 6-3-1 in the division.  Beyond their 32 goals and 3rd place finish, the Midshipmen had worked hard to get to Hagerstown.  In emails sent before the trip, players pumped one another up, asked for focused practice and promised not to let one another down.

"Waking up at five AM isn't so bad when you have a great team," says Liz Ziek.  "We accomplished everything that we wanted this season and became closer as friends."

Last season the blue and gold had been dropped in the first round by one late goal.  The opponent?  Slippery Rock.  This year their tempered resolve would make the first round an entirely different experience.  Facing Villanova, the crew from Annapolis got the score to 2-2 in the first period, then scored 7 unanswered goals to win 9-2.

"This season has been one of adversity cured by heart," said sophomore Christy Dullnig.  "Throughout sickness, studying abroad, etc. we really came together during playoffs... [but] even after beating Villanova, I was worried we'd lose focus of how good SRU was."

Dullnig was right to worry.  Slippery Rock would begin their title defense with everything they had.

"It's Playoffs, Anything Can Happen"

The game began in front of a sizeable crowd at 11:30am.  Six minutes in, Slippery Rock was on the board.

Division leader Amy Bauman, in yet another display of ability, sliced through the Navy defense, drew senior Michaela Amore out of the net, and patiently pushed a shot past -- her 20th goal of the season.

Now hit, Navy stumbled.  A minute after the goal Katie Otano went to the box for slashing.  Jacqueline Drew joined her 27 seconds later for hooking and Ella Starr was busted for roughing less than a minute after that.

For three minutes, SRU's division leading offense would be on the powerplay -- two of those minutes would be 5-3.

Despite constant harassment and a flurry of pin-pointed shots, Navy survived the barrage, thanks in large part to Amore's calm command in the crease.

SRU missed on the powerplay chances but made good shortly after.  Meredith Gruseck, just free of the penalty box, got a hold of a pass from Bauman and made it sting at 11:46.  Her goal sent the stands cheering and brought smiles to the black-clad bench.  2-0, Rock.

With ten seconds left in the period and SRU outshooting their guests 16-2, Jacqueline Drew would change the momentum.  On the penalty kill, the Navy forward used the extra room to race across the ice and pound a midshipmen goal home.

The tally gave Navy new life in the second period where the team suddenly doubled their shots.  Halfway through, one of those shots would tie the game.

Christine Dulling's goal, assisted by Samantha Leyva-Yelverton ("Dash") and Christine Tyndall would be the only event in the period as both teams traded rush for rush and defense worked hard to deny chances.

After an ice cut, the back and forth stalemate would continue, this time with Slippery Rock doing most of the cooking.   With 2:40 on the clock Navy's Tyndall took a penalty for body checking and SRU pressed like never before, trying to put the game away.  They outshot the midshipmen 15-1 in the period but each time were met with a big stop and speedy cover by an inspired Michaela Amore.

Finally, the moment.  Starr's goal from the top of the circle sent her teammates racing.  Six seconds later they were pouring back onto the ice to celebrate a hard-fought victory -- their first and perhaps the most exciting in DII playoff history.

"I have never cried due to complete and utter happiness," recalled Samantha Leyva-Yelverton.  "Respect isn't something that's always given to you.  It must be earned.  We made the impossible possible."

In the ceremony afterwards the building gave that very respect, standing as the victors lined up, faced the American flag and sang Navy Blue and Gold.  When presented, the players raced forward as one to grab the DII trophy and hoist it above the cheering team below.

"I knew we could win before we even started the game," said Starr, who was awarded Navy's playoff MVP.  "It was gonna be a close one, but we could do it.  When we scored that last goal with only six seconds left I just couldn't believe it, but at the same time I could believe it.  I had faith in my team from the very beginning." 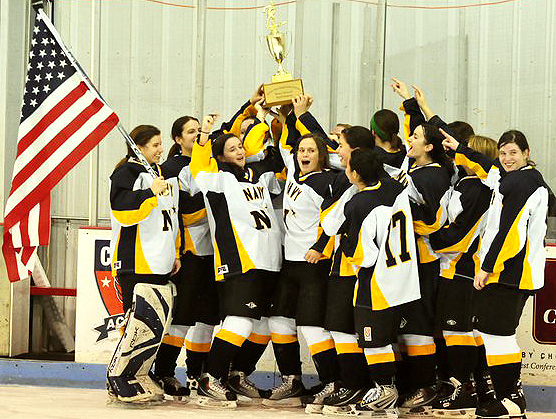 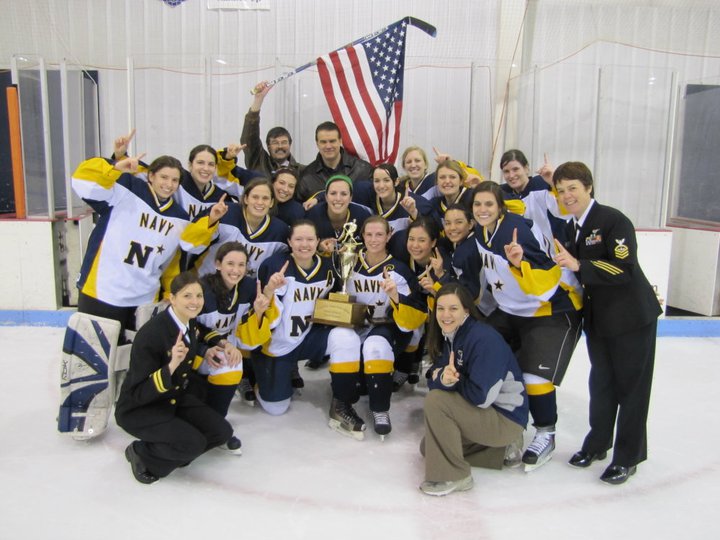