With the beautiful LaHaye Ice Center on campus and five teams in red, white and blue, Liberty University is a virtual hive of hockey.

Last September their buzz was national news;  With the addition of a 2nd women's squad, the Christian institution became the only school in the country with a team in each of the ACHA's 5 divisions.

Today that women's team is again making history -- they're joining the DVCHC. The women of Liberty's DII team are DVCHC bound

Welcomed to the league by unanimous vote on June 16th, the Flames will join 14 mid-Atlantic universities in time for the DVCHC's10th women's season.

"Our players were very excited about the possibility of joining this established, competitive league," says Coach Sara Niemi.  "Being a part of the DVCHC will help us grow as a program, become more competitive and develop good relationships."

Those good relationships began last season as the newly-minted Flames played their first games against a high school, a local adult team, a group of student beginners... and the DVCHC.

Coach Zachary Bauman agrees: "Although we did not come away with any victories... we felt we were very competitive in all of our games and are excited to compete against more teams throughout the year."

In their official request for membership, the Liberty team called the DVCHC a league that "promotes competitiveness, sportsmanship, and growth for all teams involved."  They also declared their wish to "honor and respect not only the DVCHC and the ACHA, but the game of hockey itself." 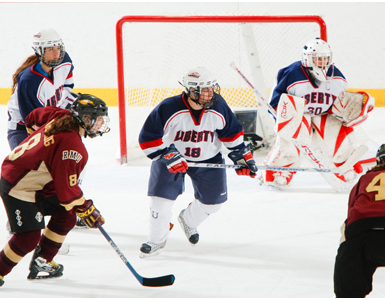 This October the Flames begin their first regular season, challenging 9 division members on their quest to the DVCHC Women's Championship and its prize, the Spikes Cup.

LU fans can cheer them on, in the rink or online, using the DVCHC in-game streaming!  Liberty players will also be eligible for awards, leadership positions and the Women's All-Star / New Stars game on NHL ice.

On behalf of their close-knit group, coaches Sara and Zac simply can't wait: "We are really excited to be a part of the DVCHC!"

"Our teams are looking forward to making these players feel welcome, and rightfully so," says Bryan Benenati, president of DVCHC Women's hockey.  "Like us, this DII team is offering young athletes, beginners to veterans, a place to enjoy the game and excel at it.  It's a fit!"