Proud members of the ACHA and USA Hockey

All Women's DVCHC teams are registered with USA Hockey. Our Women's D2 teams are also members of the American Collegiate Hockey Association (ACHA).

Inclusion under a nationally recognized association allows for the highest level of play and legitimatizes the growth and organization of collegiate teams on and off campus. Benefits of playing in the ACHA include but are not limited to:

How Teams are Structured

College club hockey differs from NCAA hockey in that many club teams are student run, and teams are made up of players of all skill levels – from athletes trying ice hockey for the very first time, to players who may have even played some time on a varsity NCAA team (or were recruited to play NCAA, but opted to attend a school where they could play hockey but with a less rigorous commitment).

You may find teams that practice just one day a week, or most days. The average schedule is about 15 games per season, but some teams play many more, and some teams play less. Some coaches are very involved in all aspects of the program, others take a back seat and are there to serve as a leader during games and practices. Some teams require players to pay dues, some are supported by their school to help pay for the team’s operations.

Most teams will welcome all players with open arms and require few formalities such as tryouts, to ensure they have enough players to compete. Other teams recruit heavily and maintain a full, competitive roster year after year. Women’s college club teams are all very different in how they operate, but the one thing they have in common is that their players are dedicated to having a team to keep playing hockey after high school.

Our Home for Hockey... 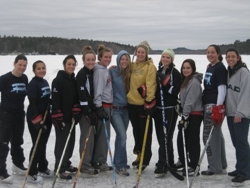 Student-led and non-profit, DVCHC Women's Hockey is leading the way in opportunities for college women, of all abilities, to play hockey in the mid-Atlantic.

To over 265 female athletes -- one of the largest women's divisions in the U.S. 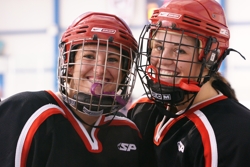 A home for higher education...

Our universities are pillars of academia. As non-varsity athletes, our students have time to go abroad, focus on studies and nurse future careers.

A home for nationally-ranked hockey...

Historically DVCHC athletes have been represented in the ACHA, both on the ACHA Women's National Team and at the ACHA National Championship.  A DVCHC team finished 2nd in 2011 and won the title in 2013.

A home for ALL levels of experience...

Including none at all.  So many women have learned the game here that we hold a DVCHC New Stars Game for those who never played hockey before college. A home for family-friendly events...

Beyond the rivalries of the regular season, our DVCHC Women's All-Star Game, hosted at the Hershey Bears home in the Giant Center, draws top regional talent.  Our playoff, the Frozen Fair Championship has become a weekend long, thrill-ride for hockey fans & families -- not to be missed!

A home with grassroots...

Coaches volunteer time and service.   Our young leaders cross benches and work with teammates for hockey.  These teams aren't pampered, they're student made. 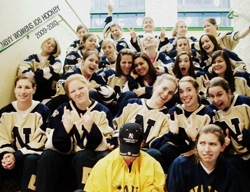 A home away from home...

Freshman to grad student, our young women have built a positive support system that their teammates can rely on throughout their time at college.

Along with Breast Cancer Awareness games & volunteering with special needs hockey, our teams collect art supplies for Caitlin's Smiles to deliver hundreds of care packages to hospitalized children.  These children are our guests of honor at every All-Star game.

Welcome home to the Women's DVCHC.
We'll see you in the stands!